For decades, the industry standard for waste management dryers (a.k.a. vertical cuttings dryers) has relied on belt-driven sheaves.   Though belt-driven systems are cost effective and relatively easy to implement, at a minimum they have represented a maintenance nuisance, at worst they represent a serious safety concern when improperly design and/or maintained.

Most belts available in the market today must meet the ISO 9563 standard for static conductivity.   However, they are only required to meet the standard when new.  As soon as the belts are in use, their antistatic properties dramatically decrease.   At the end of their useful life, these antistatic properties are lost.   However, the generation of a static electrical discharge is only one of the potential safety concerns; the generation of excessive heat when belts break or slip through overloading cannot be ignored.

Most belt-driven gear-box Operation and Maintenance manuals will include a number of warnings relative to the use of belts in potentially hazardous environments.  One of the industry’s most common gear box manufacturers have included the following warning, “[We] do not support the use of our belt drive in explosion proof or hazardous environments.  While the belt may be non-sparking, the belt drive assembly does not have a safety to disengage the belt.  In the event of an overload the belt can slip and generate excessive heat.”  However, it is not just belt-driven gear box manufacturers that have issued this warning.   One of the industry’s most prolific suppliers of industrial belt-driven sheaves shares similar concerns, “Although [we] know of no explosion caused by static generated by a V-belt drive, we cannot accept responsibility beyond that of furnishing belts within the above described limits.”

Despite the evidence of a real safety concern and the volume of warnings that have been published, little reaction has mounted within the industry.   The fact is that very few dryer operators are aware of the potential safety concerns and even fewer are trained to monitor and manage them. 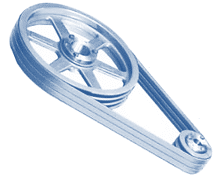 Outside the oil & gas industry, the dangers of combustible dusts have been long recognized.  Powders, coal, and oil are normally quite stable in bulk form, but when dispersed as a cloud they can form an explosive mixture.  All that is then required for an explosion to occur is a direct ignition source, which could be a heat source, frictional spark or an electrostatic discharge.

Indeed there are long established standards issued by the National Fire Protection Association (NFPA), the Occupational Safety & Health Administration (OSHA), Explosive Atmospheres (ATEX) Directives in Europe, and other national and international bodies that address the issue.   Whenever standards have been implemented and compliance observed, it is clear that dust explosions have been reduced or eliminated, but it is also clear that implementation is not universal.   This has become more obvious with the growing number of vertical cuttings dryers and related waste management devices entering the market from new entrants and the declining level of preventative maintenance being dedicated.

As it applies to the O&G industry, the Occupational Safety and Health Administration (“OSHA”), National Fire Protection Association (“NFPA”) Publication 70, and the National Electric Code (“NEC”), define two categories of hazardous materials that have been designated as Class I or Class II.  The Classes define the type of explosive or ignitable substances which are present in the atmosphere.   The specific definitions are as follows:

Each of these Classes is further subdivided into two Divisions, Division 1 or Division 2. The Division defines the likelihood of the hazardous material being present in a flammable concentration.

As is common for most oil & gas drilling installations, the common standard for capital equipment is Class I – Division 1.     The omission of Class II – Division 1 specifications is predominantly driven by the fact that oil & gas drilling operations are not known to generate combustible dusts.   This oversight is quite understandable this hazard is not readily obvious.

Static electricity is the ignition source in approximately 10% of all chemical fires and explosions.

The hazards present, relative to belt-driven sheaves, is not new.   A variety of oil-field products have used belts for decades; centrifuges and pumps are some of the most common.    History tells us that the risk of igniting a fire from a static electrical discharge generated from these devices is extremely rare.   However, waste management cuttings dryers present a new risk when improperly designed, operated or maintained due to the presence of a potentially combustible dust atmosphere.

By design, waste management cuttings dryers attempt to generate a dry solids discharge.   When an optimized dryer system is capable of achieving a solids discharge, with a moisture content less than 3%, a high volume of dust can be generated.   Though it is common for dryer installations to observe dust and oil mist (when treating oil-based cuttings) surrounding the dryer, the concentrations of these dusts and oil mist never reach a level that could be considered combustible or hazardous.   However, it is what happens within the confines of the dryer that drives the concern.    When the dryer is operating at peak performance, a confined cloud of dust and oil mist is generated within the body.

Historically, Elgin Separation Solutions has taken a great deal of care to encase anti-static belts and sheave systems within an enclosed “belt tunnel”.   This is done for both safety purposes and to maximize belt life by protect the sheaves and belts from being exposed to the solids discharge.   By having a fully enclosed belt tunnel, any electro-static discharge or heat source would not be in direct contact with a potentially combustible dust environment.   However, over the years, Elgin has witnessed a number of VCD field installations in which damage was caused to this belt tunnel or when the belt-tunnel and gear box access doors were completely removed.    Though the belts and sheaves were still predominantly protected from the falling solids discharge, any static-electrical discharge or heat source generated from damaged belts were fully exposed to a potentially combustible atmosphere.

More concerning is the growing number of new entrants into the market, especially those that are being imported from “low-cost country” sources.   In many cases, these new entrants have poorly designed or completely exposed belt and sheave systems that provide no barrier between potentially combustible oil mist or dust and a static-electrical discharge or excessive heat source.   Further, many of these same products lack any indication that their belts meet the ISO 9563 certification requirements.  This does not always generate from a poor design, but from the fact that the country of origin may not have defined safety standards and laws requiring such protections. 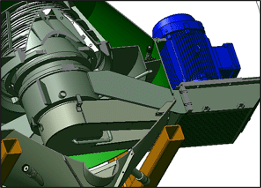 Damage to the belt tunnel and/or missing access doors have not been the only concerns observed by Elgin.   Elgin has witnessed other installations in which the continued use of belts, far past the appropriate replacement cycle, were being used, and has even observed the use of replacement belts that were not ISO 9563 certified.

The need for effective waste management is not going away.   Besides the obvious economic advantages, related to the use of waste management dryers, the market conditions and our communities demand that such technology continues to be deployed.   Given these drivers, it is up to the industry and the original equipment manufacturers to demand and design technology that is safe to use and economical to operate.  Elgin Separation Solutions keenly understands the expectations of the market and has been diligently working to implement enhancements to its line of vertical cuttings dryers that can not only ensure safety, but also significantly reduce the typical complications experienced with belt-driven systems.   How do you improve a belt-driven dryer?

Though there are a number of new belt technologies, belt-tensioning systems, and static-dissipation systems available in the market, none of these options improve the “operator experience.”    These systems require constant maintenance and the exhausting effort required to periodically replace belts.   Given these facts, Elgin Separation Solutions has designed a new direct drive dryer that completely eliminates the use of belts or the need to enter the body of the dryer for maintenance.

Elgin’s new patent-pending direct drive dryers incorporate a proprietary assembly that includes an alignment compensating drive shaft, greased-for-life 90 degree torque inverter, and the industry’s most durable and field-proven gear-box drive system.    Not only does this technology eliminate the need to enter the dryer to service and maintain drive belts, but it provides guaranteed Class I – Division 1 and Class I – Division 2 compliant drive system.   No other dryer available in the market can make those same claims. 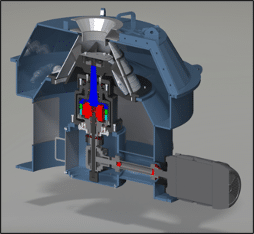 Beyond the core compliance benefits and reduced maintenance benefits, Elgin’s Direct Drive Technology yields a number of unique benefits, including:

Elgin Separation Solutions is a turn-key solutions company in the Oil & Gas, Mining, Trenchless and Water Intake Industry. Contact us today to learn more about Elgin.

Connect with Elgin on LinkedIn